As the only youth soccer organization in the Tri-Valley to own and operate its own futsal facility, San Ramon FC was one of the first clubs to embrace futsal as a significant part of the player’s developmental pathway. 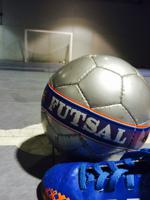 “Futsal is a major part of the developmental pathway for our players, and this partnership allows us to continue to develop our knowledge and programs to better serve our membership,” said San Ramon FC’s Executive Director, Dan Chamberlain.

Founded in 1994, US Youth Futsal is the largest US Soccer-affiliated futsal organization in the United States, overseeing more than 50,000 players in 100 local leagues in 30 states across the country. In addition to hosting youth leagues in every corner of the country, they also work tirelessly on the development of programs that help advance futsal in the United States.

Futsal is an exciting, fast-paced small sided (5v5) soccer game that is played across the world and is officially recognized FIFA. The sport is played indoors on a basketball-sized court with touchline boundaries and no walls.

Due to the small dimensions and fast pace of the game, futsal demands a high level of skill and forces players to make many more decisions than a typical outdoor game.  When implemented properly, futsal can translate into technical and tactical excellence in the outdoor game.

Futsal is played in all the continents of the world by over 100 countries with 12 million players.  Soccer superstars such as Pele, Zico, Ronaldo, Messi, Kaka, and Katia grew up playing the game and credit futsal with developing their skills.

Please consider joining our email list so you can stay informed about San Ramon FC’s upcoming futsal leagues and programs.