San Ramon's offense finds its scoring touch with a 4-1 win at home. 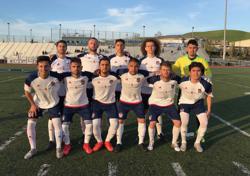 As it turns out, Rawnsley was just getting started.  He proved to be a challenge for Sacramento Gold's defense, receiving passes from the midfield and creating opportunities all night. He tallied two more scores in the 2nd half as San Ramon extended its lead to 3-0.

The Gold found their scoring touch after that, putting one into the net to bring the score to 3-1. San Ramon's Jesse Morales capped off the scoring for the night. Morales delivered his second goal of the NPSL season, receiving a pass from the end line and slotting it past the diving goalkeeper.

The match ended with a 4-1 victory for San Ramon FC.

With two wins and two losses on the season, San Ramon FC will play its next match on the road against Academica SC in Turlock, CA.  The match is scheduled for Sunday, April 28 with a 4 pm kickoff.  Academica SC is selling tickets for $7.

Note: Another first for San Ramon's NPSL history books, as Simon Rawnsley gets the team's first-ever hattrick in the NPSL.