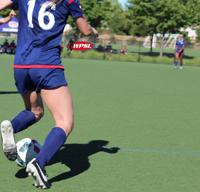 San Ramon FC's WPSL team opened their fourth season in the league with a solid 4-0 win against Pac North conference opponent Marin FC Alliance.  The team traveled to San Rafael and played the match in the rain at San Rafael High School at 4 pm on Saturday, May 18.

The team resumes training this week and will play their second match of the season on Sunday, June 2nd, in San Ramon.