The team earned a 4-2 victory on the road vs Sonoma County Sol in Petaluma on May 18. 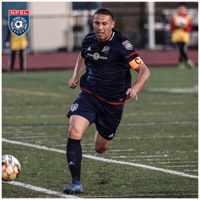 Saturday's match against the Sonoma County Sol was played in Petaluma in the midst of an unseasonal May rainstorm. With the storms overhead, a flurry of goals came raining down on both teams. When the final whistle blew, San Ramon secured a 4-2 victory and collected three important points in their push towards the playoffs.

San Ramon tallied the first goals of the match. Both Octavio Guzman and Gerardo Mendoza scored against the run of play in the first half. At halftime, the Vaqueros found shelter in the locker room with a 2-0 advantage.

The rain continued to pour down through the second half, but it was the Sol who found some light. The home team capitalized on San Ramon's mistakes and punished the Vaqueros with two goals of their own. Buoyed by a feeling of confidence, the Sol created a few more chances, only to be thwarted by impressive saves from goalkeeper Kevin Gonzalez.

Both teams missed opportunities in front of goal, but it was the Vaqueros who finally struck again. The Mendoza brothers, Luis and Gerardo, combined down the right side to create one of the best chances of the day. San Ramon FC's Alex Uribe made the most of the opportunity. Uribe finished what the Mendozas started, putting the ball into the back of the net for what proved to be the game-winning goal.

Entering the game as a substitute, Arnulfo Garcia helped the visiting team eclipse the Sol. With a sublime piece of skill,  Garcia chipped the ball over the onrushing Sol goalkeeper, scoring the fourth and final goal of the match.

While not the prettiest of games, the Vaqueros walked off with three critical points as they chase a top three finish and a guaranteed playoff spot. The team now rolls into a much-needed bye week and can nurse some bumps and bruises before their next match against on the road against first-place FC Davis.