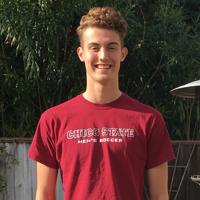 Steve and Stephanie Shaw, along with the San Ramon Futbol Club (SRFC) are excited to announce that Tyler Shaw has accepted an offer to play soccer at CSU – Chico in the fall of 2020. He will be studying a Business -Marketing major.

Chico State is a Division II school and is coached by Felipe Restrepo, in his 13th year as Chico State’s head men’s soccer coach. In 2019, they finished the season with a record of 12-5 with three members of the team receiving United Soccer Coaches All-West Region honors.

Tyler Shaw is a senior at California High School and a goalkeeper for the SRFC club for the 2001/02 Boys NPL team. Tyler also played varsity basketball for California High School for two years in order to help cross-train for soccer. He and his team have played internationally in the Spain Donasti Cup tournament and in two of the prestigious Southern California Surf Cups.

Tyler stated, “I chose Chico because I really like how the coaching staff was focused on building good soccer players while being good people. Also, it was nice to see they have a strong alumni connection with past players that helped the current players succeed.”

The Shaw family has been a part of the SRFC club for over 20 years and has been impressed with the competitive coaching staff, goalkeeping trainers, and Player Development Program to prepare Tyler for collegiate level play. Along with playing with his club team, Tyler has trained with the SRFC men’s team for the past 4 years. He says it has prepared him for the college soccer scene and has made him a better person as well.

“I really appreciate all the extra time and effort the coaches put into making me into the player I am today. I really want to acknowledge coach Colin Garon for all of the extra training, advocating on my behalf with college coaches, and spending a lot of time to help find new techniques to make me the best goalkeeper I can be.”