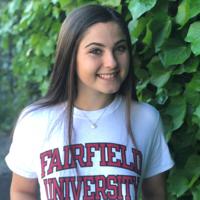 Angela Filosa will be attending and playing forward for Fairfield University. She will be a freshman in the fall of 2020 and will be in the graduating class of 2024. She currently attends California High School and will graduate in the spring. Fairfield is in the MAAC (Metro Atlantic Athletic Conference) and is a Division 1 program located in Fairfield, Connecticut.

Angela started playing soccer when she moved to San Ramon from Connecticut in 2007 and instantly fell in love with the sport. While she also did dance, cheer, and swim, it was clear to her that her real passion was soccer. By the time she got to middle school, she decided to focus mainly on soccer.  She also ran track in high school and had fun participating on the long jump team.

Filosa has played for San Ramon FC since she was 8 years old and gives credit to SRFC coaches Andy Mittler, Mani Salimpour, and Jon Lipsitz for playing a significant role in her development over the years.  Her team's head coach is Zlatko Tomic and, according to her, he has been the most influential person in her whole journey.

"I would not be where I am today without Zlatko and his help. He has been by my side for 8 years believing in me even when I didn't believe in myself all the time. He helped me transform from a girl who could only juggle two times into the player I am today. There is no way I would even be able to play at the colligate level if it wasn't for his years of coaching and encouragement."

Filosa chose Fairfield University because it was everything she wanted from a school. She loved growing up there in Connecticut and has always known she wanted to go back. She has missed the cold and the east coast.

"I wanted a change, something different for college, so when Fairfield came along it was the perfect opportunity," she said.

When she went on her official visit to campus, she wanted to know if the university was a good fit for her as a school and not just for soccer. It's a beautiful campus, ten minutes from the beach and only an hour away from her sister and the majority of her extended family. While it's all the way across the country, she does have a little bit of home there in the family and the old memories of her early childhood.

Fairfield University matched what she wanted academically, including both majors she is interested in pursuing. Finally, she LOVED her coach and the team. The environment and the mentality of the team and their culture was so incredible and overwhelming. It was like all the pieces of the process were clicking into place.

According to Filosa, Coach Barrett is an amazing and experienced coach. He was one of the most influential factors in her decision because he is exactly what she wanted out of a college coach. Barrett's philosophy is very similar to Coach Tomic's at San Ramon FC. Barrett's values match up well with her own and what Filosa has always practiced with her team.

Angela is truly grateful and excited to be part of a college program that will continue to help her grow as a player and help her achieve the dreams she has been working towards since elementary school.