Jon Lipsitz will provide a positive impact for players in his new role at San Ramon FC. 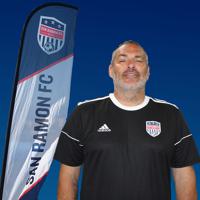 San Ramon FC is pleased to announce Jon Lipsitz as its new National Premier League (NPL) Academy Director.  Jon’s expertise and innovative thinking will help the club’s top-level players. The ultimate goal is to challenge each player to help them achieve their goals and reach their full potential. He plans to work directly with the club’s NPL coaches and players to provide new layers of support for the players’ development.

Lipsitz has an extraordinary amount of coaching experience and he brings a wealth of knowledge that will benefit San Ramon FC’s players. Jon's coaching career spans three decades in college and youth programs across the United States. He has been the head coach of the University of Kentucky’s women’s D1 soccer program. In the Bay Area, Lipsitz has been a staff coach for both UC Berkeley and Saint Mary’s College D1 women’s soccer programs.  Jon is the new head coach of the Monte Vista boys varsity soccer program in Danville, CA. He also holds an A License from the US Soccer Federation.

At the youth level, he has guided an ECNL club from having a single team to fielding over 30 teams while overseeing player development.  He said, “This opportunity to develop an NPL Academy for SRFC is right in my wheelhouse.” Lipsitz plans to introduce new developments for NPL players and teams in the coming months, such as player education using Trace video analysis, which is so critical in today’s technology-driven, visual world. He’s also looking for tournament opportunities that all NPL teams can attend together, to further develop camaraderie and inclusiveness among the NPL Academy teams.

As the club continues to enhance its programs for youth players, it’s critical to engage the skills and abilities of its talented staff to lead them successfully.  In his new role, Lipsitz is poised to deliver more training and education for youth players on the soccer field.  In the coming months, the club looks forward to seeing its hard-working, skillful players further develop under his leadership.