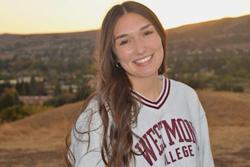 San Ramon FC congratulates our youth player, Katie DeMillo, who recently committed to attend Westmont College and play for its women’s soccer program. Katie is currently in her senior year at California High School in San Ramon, CA.  She plans on studying Communication Studies at Westmont. Her long-term career goal is to become a speech pathologist.

Westmont College is located in Santa Barbara, California and its location is one of the reasons Katie chose this school.  It is a private Christian college which is another important factor that influenced Katie’s decision. Regarding its women’s soccer program, Katie stated that she likes how “competitive and unified” the Westmont Warriors’ team is.  Westmont’s women’s soccer program had great success last season, winning a co-Golden State Athletic Conference regular-season championship in the NAIA. The Warriors also advanced into the quarterfinals of the NAIA National Tournament. Last month  Westmont’s Women’s Soccer was recognized as one of the “Programs That Inspire”; one of only 20 collegiate women’s soccer programs nationwide to receive that distinction from the College Athletic Advisor organization.

Katie began playing soccer around age 5. In addition to soccer, she played youth ice hockey as a child. For the last 7 years, she has enjoyed playing in San Ramon FC’s competitive program. She’s had fun playing and developing her skills through hard work, dedication, and competition in various local and regional tournaments as well as fall and spring league matches with NorCal Premier.  Katie is currently a member of the San Ramon FC 02-03G NPL team, coached by Jon Lipsitz.

To play soccer in college, each player must put in countless hours of work in school and at practice to be successful.  With only 10% of female soccer players advancing to play collegiate soccer*, Katie’s commitment to play at Westmont College is an impressive accomplishment. We look forward to watching her play for the Warriors and adding her name to our college Alumni page in the near future.