Making A Difference Serving On The Board

For eight years, Steve Bried volunteered his time and effort on the Board of Directors 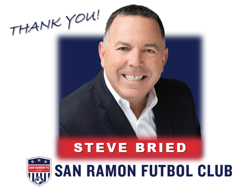 Leadership. Teamwork. Passion. Integrity. If asked which of the 11 pillars of character best describe Steve Bried, it would be hard to argue against those four. While volunteering as a board member for eight years,  Steve helped guide San Ramon FC on its mission to developing players, character, and community through soccer.  His passion for youth soccer and San Ramon FC was evident during his time on the board and our club and community are grateful for his service.

During his eight years, Steve served on various committees and also held leadership positions as Vice President and, during his final two+ years, President. He was an early proponent for what is now called "Club Day", San Ramon FC's annual, free community event to bring SRFC families together to celebrate soccer. A firm believer in the benefits of youth sports as a vehicle for lifelong success, he is both passionate and proud of the club's 11 pillars of character.

While Steve has stepped down from the board, you'll still see him at future club events and soccer matches. When asked to share his thoughts about his time on the Board of Directors, Steve quickly did so with enthusiasm, gratitude, and optimism:

"It has been an honor to serve as president for the past two and half years for our great club. I want to thank the membership, staff, and our board for the support you have given me and the club. As a club, we are in a great position for the future; to develop our athletes as players and members of our community. The club is blessed to have parents who want to support their teams and coaches, and we have players who want to continue to learn and be successful on the field of play. Our leadership is strong with [Executive Director] Dan Chamberlain leading the club and the visionary staff we employ. We are lucky. Thank you again for all your support and know I will always be rooting for San Ramon FC."

San Ramon FC is grateful for its volunteer board members, like Steve, and the current men and women serving today.  The Board of Directors provides key oversight, leadership, and guidance and is an essential part of the overall health and well-being of the club.

Tag(s): Home  News  Board of Directors