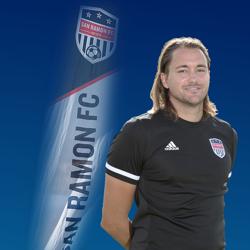 It is with great excitement that San Ramon FC announces Zlatko Tomic as the club’s new Executive Director.

Zlatko brings a valuable skill set to the role, starting with his deep knowledge of soccer, his extensive experience with the club’s operations, and his passion for serving the San Ramon community. Zlatko had been serving as the interim Executive Director while the Board of Directors interviewed candidates to fill the vacancy following the resignation of Dan Chamberlain from the position.

“We are excited that Zlatko has agreed to step up into the Executive Director role,” said Casie Abello, President of San Ramon FC. “He epitomizes San Ramon FC's 11 Pillars of Character and brings strong soccer experience, leadership, and passion for our Club and community to the Executive Director role. We are confident that his experience with and continued dedication to the club and community will serve our membership well."

Tomic first joined San Ramon FC in 2012. He has held various roles and responsibilities in the club, working as a staff coach, a Technical Director, and most recently as the Director of Coaching. He is well known and respected by colleagues, players, and families in the San Ramon community. He has been involved with many of the club’s milestone events, including the club’s rebranding in 2016, its membership in the NPL, WPSL, and US Soccer’s Players First (P1) program.

Tomic spent several years as a player in the academy program for the professional Croatian clubs Hajduk Split and RNK Split. He then played in college at both Mount Mercy University and Holy Names University. His coaching career began after college, first at Walnut Creek Soccer Club in 2008 and then at San Ramon in 2012.  Tomic has put extensive time and effort into building his coaching skills, earning multiple diplomas from the United Soccer Coaches Organization, including the premier diploma.

“I’m thrilled and grateful for this opportunity. To be able to bring joy to others and make a difference in people's lives through the game of soccer is a dream come true,” said Zlatko Tomic, Executive Director, San Ramon FC. “As an organization, we will continue to do everything we can to improve the soccer experience for everyone in our community and are excited about the future.”

With Zlatko stepping into the Executive Director role, effective immediately, Mani Salimpour will be expanding his role to include both Director of Coaching and Player Development.