Stiner to play for UCSB in September of 2023 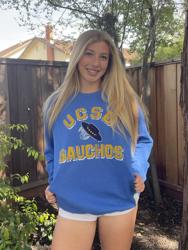 San Ramon FC congratulates youth player Regan Stiner! Regan signed a letter of intent this spring to attend the University of California, Santa Barbara and play for its Division 1 women’s soccer program. She is currently in her junior year at California High School in San Ramon, CA and also plays on the Grizzlies high school varsity soccer team and the club's WPSL team.

For Regan, the location is a big factor in her decision to attend the school. UC Santa Barbara is located in the city of Santa Barbara on the southern California coast about 90 miles north of Santa Monica. “I instantly fell in love with the campus, the downtown, and the beach next door. It is just a perfect environment for everyday life and I am a very active person and there are just so many things to do there,” Stiner said.  Add in a terrific soccer program and coaching staff and Regan knew this was the school she wanted to attend.

Regan did her homework, attending ID camps organized by the women’s soccer coaching staff to determine if she liked the program.

“I went to a couple of ID camps and loved the way they were run by the coaching staff. They instantly made me feel welcome and tried to establish individual relationships with everyone. For me, the humor was also a huge aspect because it made the whole experience that much more fun and positive. They led some informational sessions that really helped expand my knowledge of the school as well.”

Her ID camp attendance helped solidify her decision on the school’s D1 soccer program and her decision to become a UCSB Gaucho. “I love the family environment and the mindset that they can always be better, there is always something to learn. It is an amazing balance of hard work, passion, and laughter. I also love to always push myself and play at the highest level I can,” Stiner said.

Regan began playing youth soccer at the age of 3 and hasn’t stopped since. She also played youth softball growing up. She’s played soccer for 13 years and counting, currently as a member of the club’s 2005G NPL team and also San Ramon FC’s WPSL team this summer. Her current positions are midfield and forward. She has been invited to participate in both the NorCal Premier Player Development Program (PDP) and the Cal North Olympic Development Program (ODP).  “I have been in the Cal North ODP Program for 3 years and was an invitee for the Portland Timbers Cup, AZ West Region Championships, and Regional Camp.”

As a member of the 2005G NPL team, Stiner has benefited from both Trace video technology for analyzing her games and weekly P.A.S.S. training. P.A.S.S. is an acronym that stands for power, agility, strength and speed and San Ramon FC’s training curriculum is developed by the club’s coach Dan Diodati. The 05G NPL team has attended high level tournaments in the west, including the Las Vegas Players Showcase and the San Diego Surf College Cup. Playing on the club’s WPSL team gives Regan additional experience competing against top level collegiate and high school athletes in Northern California.

Currently a junior at California High School, she plays on the varsity soccer team for the Grizzlies and helped the team make a deep run in the North Coast Sectional (NCS) playoffs, ultimately reaching the finals and finishing in second for the 2021-22 season. One of Regan’s goals for the Grizzlies recently won a friendly social media competition for “best play of the year” by a female high school athlete. The competition was organized by the media organization 49ers Cal Hi Sports. You can view the video of her goal on the 49ers Cal Hi Sports Twitter feed. Stiner will graduate in June of 2023 and attend UC Santa Barbara in September of 2023.

Regan is grateful for her time at San Ramon FC, crediting numerous current and former club coaches who have helped her grow and develop as a player and person. “I can’t thank all the coaches at SRFC enough; especially coaches Colin Garon, Mani Salimpour, Dragan Hinic, Zlatko Tomic, Andy Mittler, and Jon Lipsitz, who are each a tremendous part of why I am here today,” she said.

To play soccer in college, each player must put in countless hours of work, both academically and athletically, to be successful. With only 10% of female soccer players advancing to play collegiate soccer*, Regan’s commitment to attend and play at UC Santa Barbara is an impressive accomplishment. We look forward to watching her play for the UCSB Gauchos’ women’s soccer program and adding her name to the San Ramon FC Alumni page in the near future. 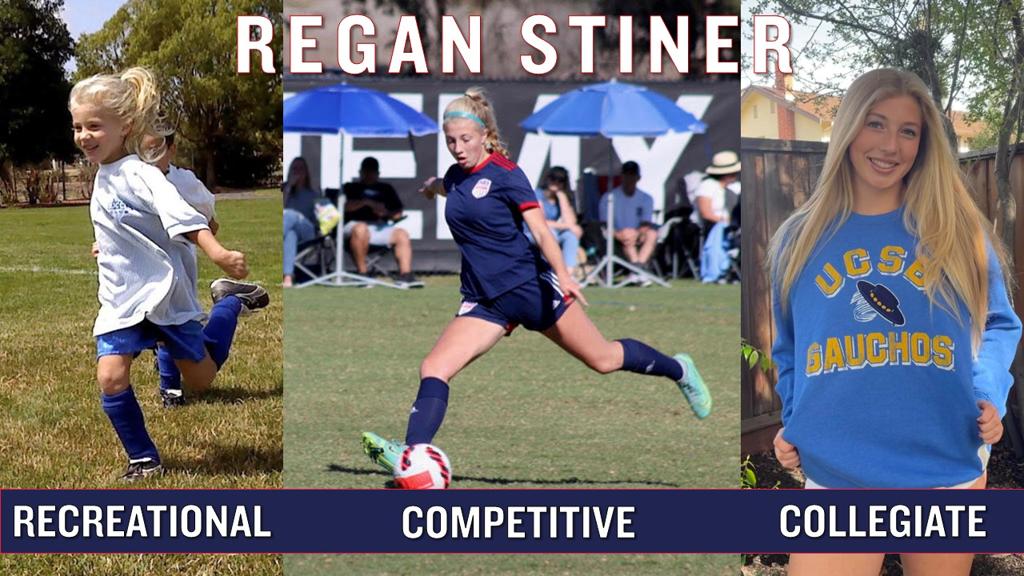