West Point and the USMC For Two Grads

SRFC seniors headed into the US Armed Forces after graduation

Hare & Langefels To Serve Country In The Military 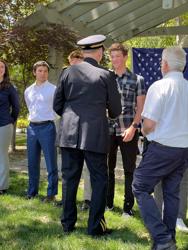 With 12,000+ applicants and only 10% accepted into the Academy,  Hare's acceptance into the West Point Academy is a testament to his academics, his fitness, and his character.  The application process is extensive.  It takes more than a year and requires the nomination from a member of Congress. Such nominations are limited and members of Congress are very selective in their choices. For Lewis, Congressman Eric Swalwell provided the nomination for his application.

All West Point appointees have to be scholar athletes, and Lewis’s club and high school soccer resume, along with his soccer related charitable work with the organization Soccer Without Borders, formed the foundation of his West Point application.

Lewis Hare's family does not have a legacy of military service. So, his decision to pursue admission to a military academy is not rooted in family tradition or expectations. When asked why he was attracted to West Point, Hare said that it offered "an opportunity for a great education and military service in one package."  During his youth soccer career, Lewis enjoyed the "experience of training and playing with a group of close friends, working towards a common goal and winning together."

He'll find a similar experience awaiting him when he begins his education at West Point.

Lewis played youth soccer for 10 years, spending about 6.5 of them at San Ramon FC.  He's was also a member of the Cal High men's varsity soccer program.  A defender on the field, Hare played both outside back and center back from the 03/04B NPL and the varsity team.  His 03/04B NPL team finished their 2021-22 season with both a NorCal Premier spring league title and a State Cup championship trophy in the premier division of the tournament.

While success on the field feels great and has been well earned, Hare learned many of the requirements that success demands from teams and individuals. "The tight knit group that our 04B team has been for almost 9 years has taught me an infinite amount about teamwork, friendship, and working with others." Whether its a soccer team or a military unit, teamwork is vital to success.

Lewis added: "My time at SRFC has taught me a lot of lessons in character and leadership. The great coaches I’ve had throughout my years here have shown me what excellent leadership and mentorship looks like as well."

Hare credits two San Ramon FC coaches in particular:  Dan Chamberlain and Mani Salimpour. Both men recognized that they have a role to play in helping players achieve their goals, even when they didn't involve soccer.

"Coach Dan and Mani have been some of the best coaches I’ve ever had. Since a couple years ago when I realized I didn’t want to try and play professionally or at a high level college, and pursue other goals like West Point, Coach Dan and Mani have been the most supportive mentors and people I could ask for. I think there’s so much that these two coaches have done for me off the field and so much that they’ve contributed to my character, that I cannot thank them enough." Coach Chamberlain also served as a reference on Lewis' application.

For those unfamiliar with West Point, it is considered to be the preeminent leader development institution. The West Point website states that the U.S. Military Academy at West Point's mission is "to educate, train, and inspire the Corps of Cadets so that each graduate is a commissioned leader of character committed to the values of Duty, Honor, Country and prepared for a career of professional excellence and service to the Nation as an officer in the United States Army." 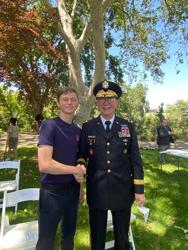 Samuel Langefels
Samuel Langefels played on the San Ramon FC 03/04B White team during his final season with the club.  He loves soccer and loved his time playing for SRFC.  Upon graduating from high school, he enlisted in the United State Marine Corps and is attending boot camp this summer for new recruits.

Samuel is pictured here at a recent swearing in ceremony for armed forces recruits.  It was held in Danville on May 22nd.

San Ramon FC is proud of Lewis and Samuel and wish them well as they serve our country in the armed forces. Both are talented young men of character who will continue to grow and develop in their chosen careers.