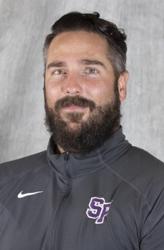 San Ramon FC is excited to announce the appointment of veteran goalkeeping director, Kris Hall, as the club's new Director of Goalkeeping.  Kris will step into his new role effective immediately. Hall brings with him 15 years of coaching experience and will look to make an immediate impact, continuing the growth and development of our goalkeeper program.

In his role with SRFC, Kris will oversee a staff of goalkeeper trainers and will work closely with SRFC coaches to help better design and implement the integration of goalkeeping into the day to day team training.

Most recently, Hall served on San Francisco State Men's Soccer coaching staff ahead of the 2021 season. He has also served as the Executive Director at Vacaville United Soccer Club while head coaching the National Premier Soccer League club, FC Davis. He is the CEO and Owner of Maverick Goalkeeper Academy and has worked at the professional level with the Oakland Roots during their 2020 season.

He earned his Bachelor's Degree in Kinesiology with an emphasis in Education from Cal State East Bay. He holds an Associate of Science Degree from Modesto Junior College.

Hall takes over the position from San Ramon FC's previous Director of Goalkeeping, Colin Garon, who recently vacated the position after six years. Colin has accepted a position on the coaching staff at Cal Poly Humboldt in order to be closer to family.  The club wishes Colin and his family well and thanks him for six years of dedication to the players and families at San Ramon FC.