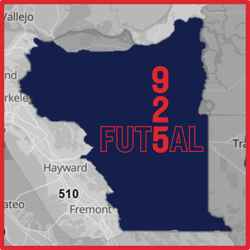 For Alameda & Contra Costa Counties And Beyond

San Ramon FC announces the launch of a new affiliate club, the 925 Futsal Club. Starting this fall, the 925 Futsal Club will offer an elite, competitive futsal program for boys and girls in the U9-U14 age groups. The club will focus on education, competition, and growth for its players and teams. Its name was inspired by the passionate youth soccer communities thriving in the 925 area code of Contra Costa and Alameda counties.

The 925 Futsal Club is "club neutral",  which means players from all clubs are welcome to play.

The new 925 Futsal Club is led by Bijan Sadeghy and powered by San Ramon FC. 925 Futsal’s professional coaching staff will focus on teaching and developing youth players to understand the game of futsal, both tactically and technically, and help them learn to use this knowledge in competition. The club’s new website is available now at www.925futsal.com.

An informational meeting will be held on Zoom at 7 pm on October 12 where the coaching slate will be announced, program details will be discussed, and a Q&A session too.

U9-U14 tryouts will be held on October 14 in San Ramon and the inaugural season is slated to begin October 21. The 2022-23 program will feature 30-33 training sessions and multiple tournaments, organized by US Youth Futsal and the US Futsal Federation, from October through July 2023.  Players can register for free for U9-U14 tryouts now.

Mr. Sadeghy shared his thoughts on beginning a new club that is focused on serving youth soccer players in Alameda and Contra Costa counties:

“I’m extremely excited to start 925 Futsal and help grow the game of futsal! I’ve always believed that futsal plays a huge role in the development of a player. Being able to run a futsal club to help in that process means a lot to me and the other coaches involved. We are ready to compete at the highest level and represent the 925!”

The 925 Futsal Club strives to be a pathway for players to maximize their potential in futsal and soccer. Futsal participation will enhance soccer skills and can even provide dedicated futsal players with long term futsal opportunities for competitive play at the youth, collegiate, and professional levels. Futsal is one of the fastest growing sports worldwide.

Futsal is fast paced, technically challenging, and lots of fun. The game of futsal emphasizes skills over strength and size. It’s a smaller field with fewer players and a faster pace of play. Futsal players touch the ball many more times during the game, providing individual opportunities to improve footwork, passing, and quick thinking.

Players, families, and youth soccer community members are invited to follow 925Futsal on social media. The 925 Futsal Club has established accounts on Instagram, Twitter, and Facebook. The primary hashtag for the club will be #925Futsal.

Inquiries for the new club can be directed to Bijan Sadeghy at bsadeghy@925futsal.com.