Costume Fun On The Field

Teams and coaches enjoy competing in costumes around Halloween time 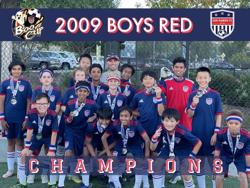 Creativity, camaraderie, and competition make the annual Halloween tournaments so much fun for youth soccer teams. This year San Ramon FC teams competed in costume at the Boo Cup Tournament in San Ramon and the Boo Fest Tournament in Sacramento.

San Ramon FC’s teams enjoyed their tournament experiences and the 09B Red team and Coach Kevin Jack — pictured wearing the red/white/blue attire — had a thrilling run to the finals, winning the championship after a tense round of penalty kicks on Sunday afternoon at Rancho San Ramon.

Below you will find a slideshow of photos showcasing various SRFC teams in their costumes at tournaments in October.

You will find pictures of these teams:

Red White and Blue: 2009B Red team and Coach Kevin